Bloomingdale is proud to partner with the Cochrane Golf Schools

Bloomingdale's Junior Golf Program provides a fun and effective learning environment encouraging each Junior to develop his or her golf skills to their highest potential. Throughout the training, Juniors work on all components of the full swing and short game, on-course training and mental preparation for scoring.

Programs for Ages 8-16 include:

A variety of Junior Programs are offered throughout the year for students of all levels, including Fall, Winter & Spring Afterschool Programs and Junior Golf Summer Camps.

"Simply stated, this is excellent instruction. J.D. Carino is a knowledgeable, superbly prepared, and thorough teacher in all aspects of the game. Forget the YouTube videos and your buddies' swing tips, this is the path to sound fundamentals and a much more enjoyable time on the course! Despite playing for 25 years, every lesson with J.D. provides "Ah ha!" moments! Now I understand what the problems are, what causes them, and how to get after lasting solutions. I really feel like I'm on the right path to a much better game. I've seen the John E.S. Cochrane instructors make huge improvements in my friend's games, now I know just how that happens. Working with J.D. has shown me the unvarnished truth. This how to get better, plain and simple."
~ Rob W. April 2016

"J.D., thanks so much for that putting lesson. I went out the next day and didn't three putt once in the entire round and made a few one putts. In fact my golfing buddy was so impressed he said he would book a lesson with you. So look out for his name. Once again thanks."
~ Faizal H. April 2015

"I was formerly a single digit handicapper who had lost my way ... the band-aid fixes no longer worked and I was losing 4-5 balls per round and struggling to break 100. I went to J.D. to rebuild my swing from the ground up. We went back to basics with grip, posture, stance, and alignment. We worked on distance control and swing path. Five easy lessons later, I'm back to shooting in the 70s and enjoying the game."
~ Troy H. May 2015

"You called it when you said I would help on the short game (scramble tournament). I had some iron, wedge shots and putts that amazed everyone. The other players of the foursome couldn't believe that was my first actual outing. You're not going to believe it but I actually pared 4 holes on my own. Two par 3's, a par 4 and an astonishing par 5. J.D., thanks man. You will definitely be part of my speed dial."
~ Jose R. May 2015 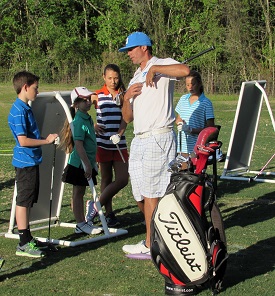